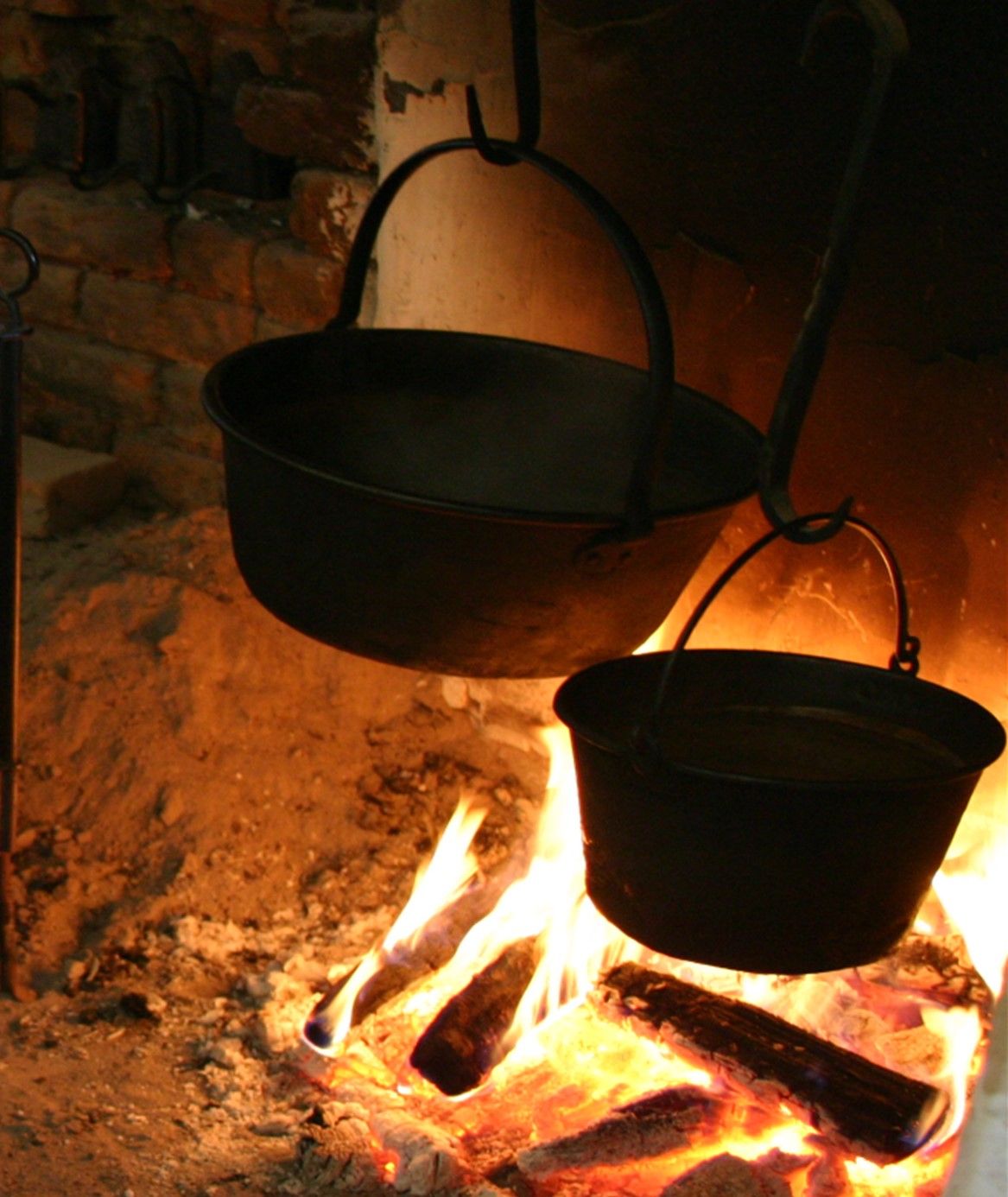 So, I am a few days late getting this post up, but classwork has been a bit hectic with the end of summer term coming up. Another post will be coming soon about video editing, one of the big new skills I am learning. However, to the second part of this blog post, the actual practice of cooking during the summer over an open fire. Just to remind everyone, wood, start fire with banked coals, get water on to heat. (Note: my experience is from research in a middle-class German immigrant town, which had enslaved workers in some, and later most, of the homes.)

So, now you have your fire going, you have gotten your water started heating, and it’s about 5:30 am. You’ve got a good start! Now its time to prepare the second largest meal of the day, breakfast. It is likely that the household has already gotten up and started working by now, because they also want to take advantage of the cooler morning hours. Breakfast in a German town would be around 7 to 8:30, depending on the family, but often a couple of hours of work would be done before eating (the English usually ate about 1 to 2 hours later than Germans for all meals of the day). I have even seen mentions of ‘second breakfast’ in records, which probably indicated getting some type of bread before starting work, especially those doing heavy labor, and then sitting down to a full meal once it was cooked (you thought Hobbits thought this up?). One thing to keep in mind about breakfast – if you wanted meat, it needed to be either quick cooking, or leftover from the day before. The thing to remember about meat before modern storage (meaning freezing or refrigeration) is that your choices for fresh meat are limited to the times you can slaughter and eat the meat before it spoils. That means there are big differences to what types of meat you are eating in summer, and how you need to cook it. Fresh pork is not available outside of the coldest months, and those are fairly short in NC. Between November and February at the latest would be the only time you ate fresh pork. Other than that, it was all cured (German families raised pigs on small lots and put up their own pork). Beef has a longer time it is available, up into May and early June, especially for young animals (veal). Mutton, common with English, is similar to beef. But the most common types of meat for summer are the smaller animals, fish, poultry, and eel being the most common I have seen. All of these can be killed and eaten fairly quickly, so spoilage is less of a problem. Other than that, you need to soak and cook cured meat for long times, so you are not cooking them for breakfast. So if a cured ham was boiled yesterday, you can cut slices for the breakfast meal, otherwise, it will be something that can be fried quickly, such as sausages. Eggs are quick to cook, and easily available during summer. Left over pies or puddings from cooking the day before, or on a baking day, were also commonly served at breakfast (these could be savory or sweet pies). Breakfast would be a hearty meal, similar to our idea of lunch today.

At the same time as getting breakfast ready, you have to get started on cooking dinner. This is the mid-day meal, and the biggest meal eaten. ‘Dinner’ is actually just the biggest meal of the day, but since most people have that at the end of the day now, we call that meal ‘dinner’. In the 18th century, the last meal of the day was ‘supper’, which was the smallest in terms of food consumed. Unless you were wealthy and had moved the main kitchen out of the household, no one wants the heat of a cooking fire to heat up the house, no matter who was doing the cooking. While it wasn’t uncommon for middle class households to have enslaved women cooking for them, there was still the issue of a hot chimney heating up the house, so most food was consumed before the hottest part of the day. Another thing to consider is how you want to serve the food – hot or ‘room temp’. Remember that ‘room temp’ in the 1700s is not 72 degrees, its whatever the house is at noon. So if you can fix some items early, then serve them at room temperature, you can get some pretty hearty meals without cooking up until the last minute. Something that was commonly served was savory egg pies, similar to a quiche, that could easily be prepared early, and then served at meal time at room temp. Most savory pies and puddings could be cooked early and served at room temp during the summer.

The best way to avoid the heat of the fire? Don’t cook the food. In summer, there are plenty of options for cold salads made with cucumbers, beans, and other garden produce that don’t require heat. Cooking a large ham can be done one day, then it can be used for several days after to create cold meals. A beehive bake oven (German style) contains the heat much better than an open hearth – when you have to bake bread, the best use of that heat is to bake other items that can be used over the next few days to supplement uncooked produce. All of these tricks allows a cook to limit the time in summer that the kitchen fire needs to be lit. But what about supper, you say? Well, that was the smallest meal of the day, especially in summer. You have worked all day in the heat. Most likely, you took a break at the hottest point of the day, and with sunlight lasting into the evening, you can work later when it gets a little cooler. A big, hot meal is the last thing you want to eat. Supper in summer might be bread and butter, or some fresh, green corn (field corn eaten before it matures was called ‘green’ when the shucks were still green; that is the only sweet corn that was available, and it was only eaten in late July to the first week or so of August). And that was all you had. The only people who ate big meals in the evening were the very wealthy who had separate kitchens, had not done heavy physical work during the day, and had enslaved women and men doing the cooking for them. Without all of those elements, supper was a small meal, and might not even be eaten at all in the hottest weeks of the year (a slice of bread and some beer would be enough for many).

So if you ever wondered how people dealt with cooking before the gas or electric stove and modern air conditioning, wonder no more. They adjusted what they ate and how they cooked, and dealt with the heat just like we do – by staying as cool as possible!