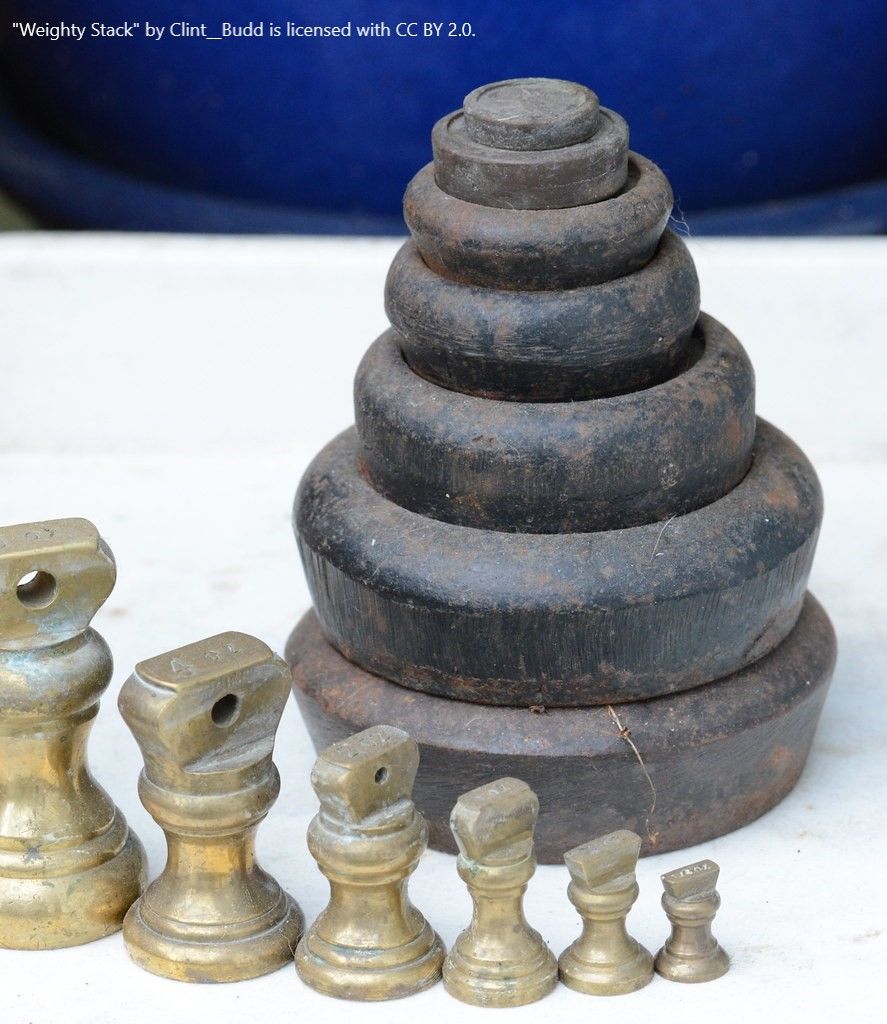 Ok, so this is a longer post than I planned, but hopefully it holds your attention. I expect a lot of people will think it can’t possibly be fun to study weights and measurements, but I promise you, it really is! There is a lot of interesting trivia, and its not just that the US doesn’t use the metric system like the rest of the world. In this post, I am going to link to a lot of different sources, but hopefully I can convince you that this subject is worth reading about!

Weights and measures are actually more important than we think. Its not just that we use them everywhere, they also help society run smoothly. The first writing that has been found was used to keep track of weights and measures, so that people knew how much was paid and owed for goods, services, and taxes. It has been assumed that writing was developed to keep track of these things in settled groups of people, the first ‘civilizations’, at least as we judge them today. So it is hard to overstate how important weights and measures are to a society. In just the last few years, scientists have officially begun to shift away from a physical thing to represent the prototypes of weights and distances, to a mathematical calculation based on universal constants. If this sounds a bit crazy, just consider why they need this. In a physical object, such as an official object to identify a kilogram, there is some loss or gain of mass over time (in terms of atoms- these are some small numbers, folks!), no matter how carefully it is stored. With the need for the absolutely precise measurements needed by today’s standards, basing units of measurement on something that never changes is essential! This change was just approved in 2019, after years of work to establish the calculations. If you want to read up on this, here is a link to a story on Vox about the process.

This brings up a particular point about the metric system, and the United States still using imperial weights and measures. The ‘Imperial’ system is based on our use of the British-style weights and measures, with all of its inconsistencies between types. (What inconsistencies? Just consider how many ways you can divide an inch – by thirds, fourths, eighths, sixteenths. Then look at the pound, as compared to volumes, etc. That is a lot of different types of conversions!)While it is true that the basic system is hundreds of years old, there were almost uncounted ‘imperial’ systems in use until the mid 19th century, and they all differed not just by country, but also by the product being measured, and even by the city of original shipment. Basically, there were a lot of differences! In the 1790s, the new French Republic wanted to use the same system across its territory. The result was the metric system. So the metric system is older than you might think. It is also what our imperial system is based on today, after a treaty in 1875. You can read about the history of this creation in Pys.org.

Oh, you thought we didn’t use the metric system? Well, actually, yes we do. All our weights and measures are based on those metric prototypes that are being recalculated now. So really, even though you might think you are working with inches, feet, ounces and pounds, actually, your numbers are all percentages of centimeters, meters, grams and kilograms. A pound is 0.453592 of a kilogram; there is no other definition of it in science, no ultimate prototype pound. And if you wondered why everyone else has come around to this system, its because it actually is a lot easier to calculate with than the imperial system. And I know, everyone wants to say ‘No, our system is easier!’ But really, we already had this argument, and the other side won, it just took a long time to convince everyone.

In 1792, the new constitutional government of the United States had to make a decision about creating a new national currency. Under the previous Articles of Confederation, each state ran its own monetary policy, and rates of exchange across the new country were based on the British pounds, shillings, and pence (even though the most common coin used was Spanish; trust me, this is just the tip of the iceberg on complications to monetary policy!). When the federal government had the chance to start fresh, the decision was made to push everyone to switch to a new system based on a decimal system. What does a decimal system mean? It means we use base 10 for calculating money divisions, so 100 pennies is 1 dollar, and so on. What does this sound like? You guessed it, meters and kilograms! 100 centimeters is 1 meter, 1000 grams is 1 kilogram. All in base 10, because it makes calculating and conversions much easier. (Can you guess why base 10 and base 12 are so commonly used? It’s right in the palm of your hand; well, actually your fingers. Ten fingers makes base 10 natural. Now look at the fingers-not thumb, you count with that- of one hand, and the number of segments in each finger – 3 X 4 =12.) If you want some in-depth mathematics, The Story of Math is a great documentary on the development of numbers, counting, and why it is so important. It can get pretty complicated, but it’s still a really good series. (You can find it on Amazon Prime, but the link I have here is to the Films on Demand catalog, which is available to most people through public and academic libraries.)

However, don’t think that the new system put in place for money in 1792 was adopted quickly! Oh, no, they didn’t want to change any more than we do today. As a result, from the 1790s through at least the 1820s, and in some areas into the 1840s, there were plenty of people still using the old money calculations. I have personally looked at store account books from the 1820s that have (what I presume is) a younger clerk using dollars and cents for a sale, and the next entry the sale was recorded in pounds and shillings. And for every shilling, you had to calculate 12.5 cents, and then do all the conversions to total the accounts at the end of the day in dollars. Even later, in the mid 1800s in New York (and I will promise to update this blog when I relocate this source) I have read a newspaper letter to the editor from a citizen who stated that if stores and companies would stop using base 12 for product packaging, maybe people would switch over to the decimal system for money completely. Poor man, he would still be disappointed in us today. When was the last time you bought 10 eggs at the grocery? (The reason for packaging by the dozen in English products? Because there were 12 shillings in a pound, and that made products easier to calculate packaging divisions for selling. Why 13 in a ‘baker’s dozen’? Because in the 16th century English bakers were under-weighting their bread, and instead of risking a hefty fine for an under-weight dozen, they just threw in an extra one.) So you see, it is really hard to get people to change once they get used to something, especially a system they use every day.

If this has gotten you curious about the history of weights and measures, or you want to see some of those many different Imperial weights and measures that were used before metric, one of the better sources I have found is from a professor of mathematics at UNC-Chapel Hill. Dr. Russ Rowlett is retired, but his Dictionary for Units of Measurement is still up, and provides a great, easy to understand list of weights and measures from antiquity to today, as well as conversions where possible. If you are like me, it’s fun just to read. But I have also used it for research when needing to understand primary source material from the 18th century. If you are interested in currency history, try the American Numismatic Society or the U.S. Currency Education Program. And finally, if you really want to see how long a group known for accounting, money, and business can hold on to a system long after it is out of use, just take a look at the New York Stock Exchange. If you ever wondered why the ticker at the NYSE used fractional divisions of stock (instead of decimal divisions) until the beginning of this century, it dates back to the old weirdness I mentioned about the states using British accounting and Spanish coins. Spain divided its peso, or milled dollar (which America based our dollar size on) into 8 reales. Spain minted a lot more gold and silver coinage than anyone else during the 1600s and 1700s, so everyone used their coins, including us. New York state didn’t like the quarter division of the American dollar that was decided on in the 1790s, so they stuck with the 1/8 Spanish division into the late 19th century. The NYSE didn’t change it’s use of fractions until 2001! (What is 1/8 of a dollar? – 12.5 cents. And the Spanish reale was called a ‘bit’, so 2 bits was equal to a quarter. See how much fun this is?)